A hundred miles north of Detroit lies Frankenmuth, Michigan, a literal step back in time.

From the moment you pull off the exit on I-75, you are transported to a European village – Michigan’s self-proclaimed Little Bavaria – complete with window flower boxes, lederhosen and what is arguably the "most Christmassy" place in America. 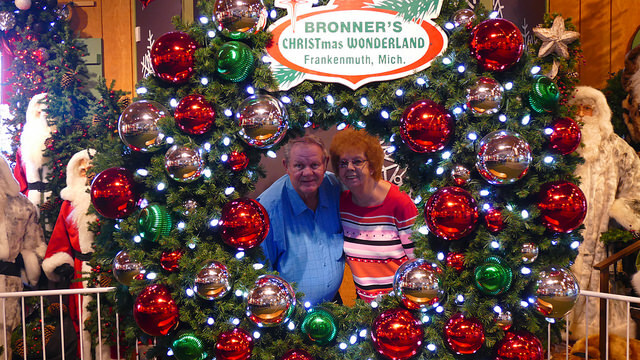 Welcome to Bronner’s, the world’s largest Christmas store. This is no seasonal pop-up. With more than 50,000 different items — including Christmas trees, lights, decorations, trimmings and more — Bronner’s is the size of nearly two football fields, and is open 361 days a year. Even the most diehard lover of the spirit of Christmas will be overwhelmed by the enormity of it all; calling it a store seems almost oxymoronic. It’s so big that it has its own restaurant where you can take a break and eat some traditional pub-style offerings. Bronner’s is also highly religious – the full name of the store is Bronner’s CHRISTmas Wonderland – and many items reflect that. 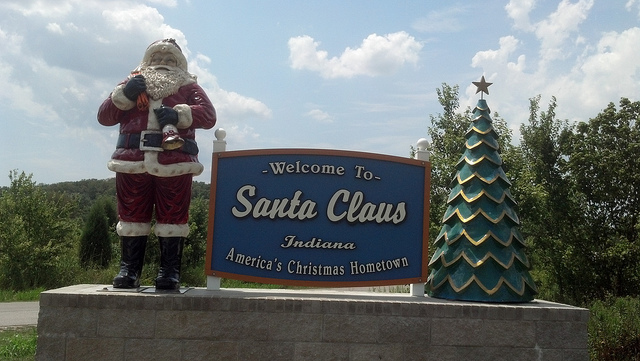 Talk about a year-round passion and dedication to Christmas. Billed as "America’s Christmas Hometown," Santa Claus, Indiana, is a real place that just happens to live and breathe Christmas every day of the year. You can stay at Santa’s Lodge, shop during the day, go to Frosty’s Fun Center with the kids, and at night take a 1.2-mile drive through one of the best light displays in the country.

Never heard of it? Well, now you have. This is the tiny town in upstate New York where Chelsea Clinton was married, a small place brimming with wealthy people who keep summer homes there or are active residents. Singer Natalie Merchant lives in Rhinebeck, and actor Paul Rudd is often in town to tend to the throw-back candy shop he co-owns.

Rhinebeck features the oldest inn in America, the Beekman Arms, which dates back to the Revolutionary War. The town is also just a few miles north of Hyde Park and the Franklin D. Roosevelt presidential home and library. 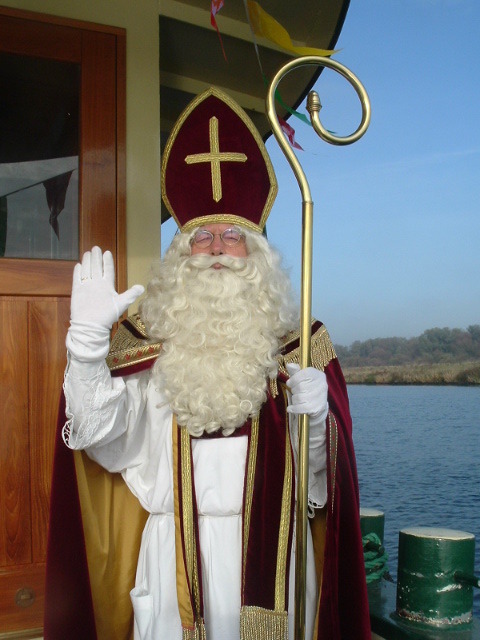 But the Christmas hook here is a centuries-old festival that traces back to Rhinebeck’s roots, when it was first settled by the Dutch in the 1600s – Sinterklaas. The annual event, always celebrated on the first Saturday in December, hosts a fourth-century Bishop with a long, white beard who happened to love children. Sound familiar? Day-long activities include shopping, music, dining, and a lively parade through town. 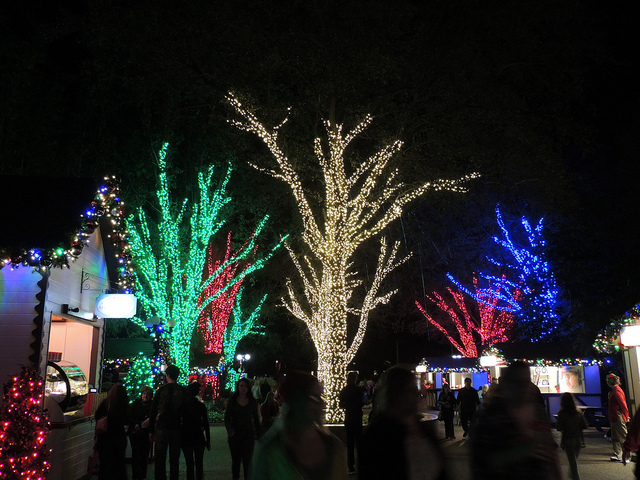 At the amusement park, Christmas Town is kid-centric with play areas, and an ice show featuring former Olympian skater Elvis Stoijko, not to mention a visit to the North Pole to chat with Santa. But children of all ages – that means grownups, too – will be wowed by the more than eight million lights at Christmas Town, plus it's signature peppermint fudge hot chocolate. 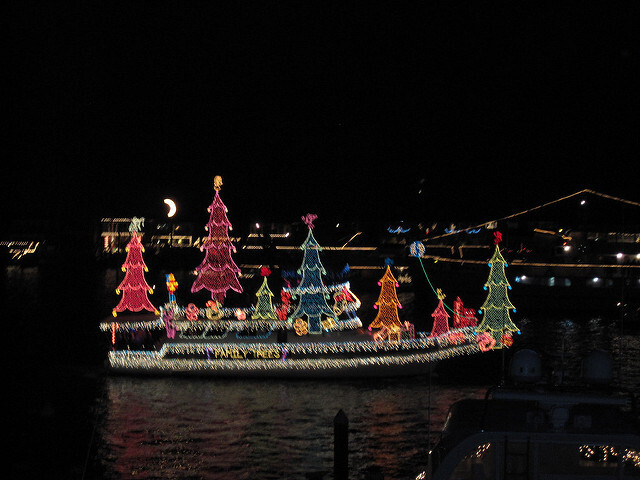 Balboa Boat Parade by by YoTuT on VisualHunt / CC BY

No, it doesn’t snow here. In fact, it would take a Christmas miracle – or some back-room deal between Heat Meiser and Snow Meiser – to have it snow at the beach. Nonetheless, one of the staples of Christmas has been the annual Boat Parade. In fact, on Dec. 13 through Dec. 17, it will be the 109th annual event in Newport. That’s how far back the tradition goes. The parade in the harbor is basically a reverse drive-thru light display, only the decorated boats drive by you instead of the other way around. 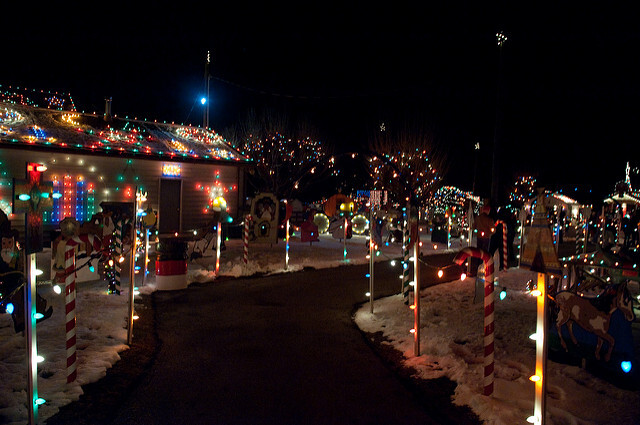 " Koziar's Christmas Village" by Ben Yanis is licensed under CC BY 2.0

One year, William Koziar began decorating his farm for Christmas with an extra splash of lights on his home and barn. That was in 1948. Almost seven decades later, after yearly additions to the display and an outcry from his neighbors to see all the lights, the farm became Koziar’s Christmas Village.

It is now one of the best drive-thru Christmas light displays in the country, and one of the top 10 tourist attractions in the state of Pennsylvania – a pretty heady achievement given that there are probably 10 great tourist attractions in Philadelphia alone. Visitors who find themselves in love will want to take a romantic walk over The Kissing Bridge — trust us on this one.

There are many things that make Durango a cool place to be for the Christmas season, including its shopping and winter activities such as skiing and snowboarding. In addition, kids in pajamas line up by the hundreds each night to take a real-life Polar Express steam engine train to visit "the North Pole," drinking hot cocoa on the journey and singing Christmas carols. 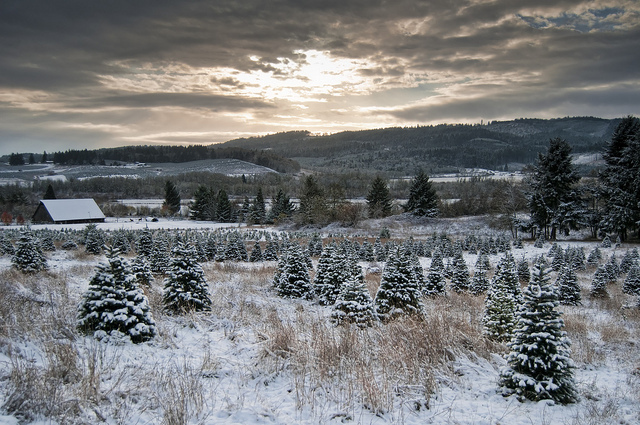 But the really cool thing is, on weekends visitors can board that same train to a Christmas tree farm, cut down their own tree, tag it, and have it transported to be hoisted on their car’s rooftop to take it back home.

Sledding? In the middle of the desert? Of course. This is Vegas, where anything can happen.

Las Vegas Christmas Town is a yearly, seasonal attraction at the Wet ‘N Wild waterpark, bringing a little wintry weather and a lot of Christmas spirit to Sin City. 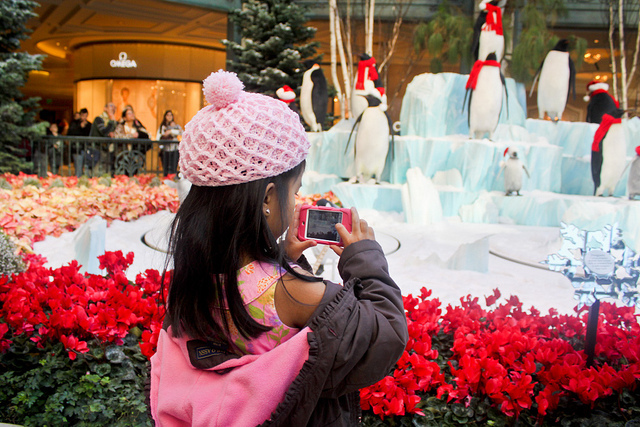 "Christmas in Las Vegas" by Adriel O. Socrates is licensed under CC BY 2.0

So great they named it twice, right? New York is a fast-paced, mile-a-minute city, but life seems to slow down a little around the holidays – at least long enough for you to get into the Christmas spirit. 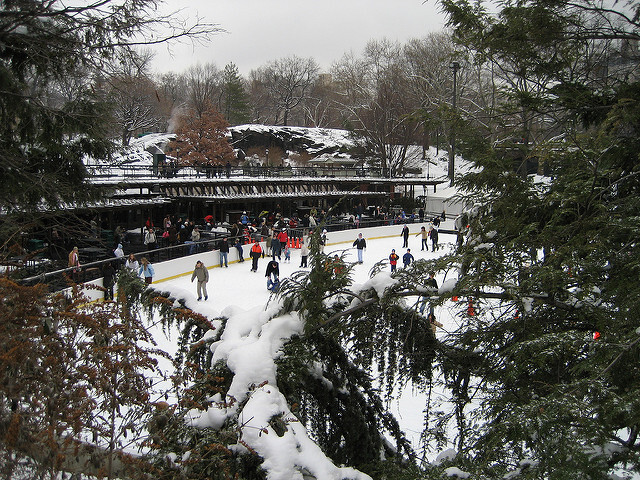 "Skating" by Waterloo Hildreds is licensed under CC BY 2.0

Starting with Santa’s arrival at the end of the Macy’s Thanksgiving Day Parade, the city becomes a magical place. The spectacular holiday window displays at major department stores are attractions in and of themselves. Skating at Central Park, Bryant Park or Rockefeller Center is a must. The vendor craft fairs at Bryant Park and inside Grand Central Terminal are amazing.

And, of course, the 75-foot-tall Christmas tree in Rockefeller Center is the centerpiece of it all, decorated with 30,000 lights and filling young and old with joy. 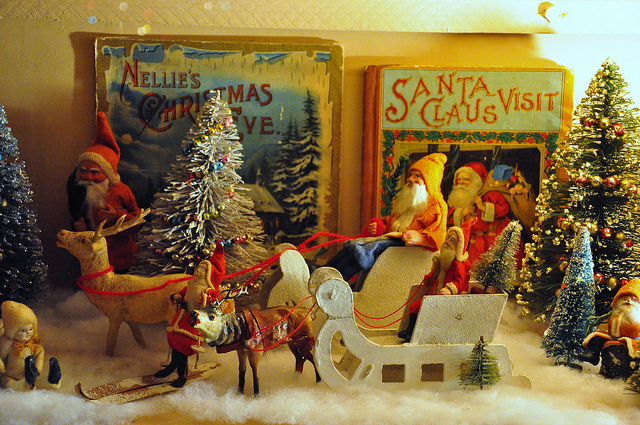 Photo by WalterPro on Visual Hunt / CC BY

If you had a day, just one day, to get yourself in the Christmas spirit, Red Wing, Minnesota, would be one of the great places to go for their annual Holiday Stroll. But you better bring your most comfortable shoes.

The Stroll is no little walk. It is a day-long extravaganza that starts with a pancake breakfast at the local Elks Club. The Festival of Wreaths allows people to bid on some of the most elaborate holiday wreaths ever made. A Christmas-based movie – ‘The Santa Clause’ this year – is shown at the theater in the afternoon. There is an ice-sculpting display, cookie-decorating classes, reindeer sleigh rides, a live Nativity scene, a tree-lighting ceremony, parade and fireworks to close the night. And that’s not even the half of it.

Hero Image by mtchlra on Visualhunt / CC BY

Get your beach fix with this week-long rip through Hawaii. Discover...

Get out on the road and follow in the footsteps of Jack Kerouac to ...

An epic East Coast experience awaits on this nine-day tour through ...